Further than the performances, the music and dances, Grupo Folklórico Alto Aragón shows the traditional folk through other activities related with the maintenance of the behaviors, musics and traditional north Aragón dances.

During all of these years, our “investigation group” have made possible for us to recover songs, dances, paloteaos, jotas, romances, etc. The most important ones are The Dance de Sta Orosia de Jaca, (more than 60 years forgotten and recovered in 1979 by us) and The Paloteao de Sinués (more than 50 years off). We have a group of “danzantes” that depend on us, and dance this religious pieces each year in the processions of the Jaca’s Festivities.

We have participated in the famous Popular Music Latin-American Conference, celebrated in Madrid. We also have took part in the IV Popular Arts and Customs National Congress celebrated in Zaragoza. So, we have participated in several Folklore and Ethnology Activities, organized by the University of Zaragoza , in the Journeys about Folklore (V) that where included in the “Conoce Aragón” Cycle of Conferences, and in the XV Folklore Gallego Congress. Anyway, There are many activities thar we have made not so important and not included here.

We have also made recordings fot the Festivals of Zaragoza, Olorón, Confolens and Jaca. Many Radio Channels have asked us for some recordings. The most famous are: RNE, Radio Zaragoza, Radio Zamora, Radio Huesca, Radio Jaca. Out of Spain, we have recorded songs for differents channels in France and UK. In November of 1983, Radio Popular de Zaragoza (COPE) emitted a special program dedicated to our VIII anniversary. It took more than 1 hour. Speaking about the TV, differents TV channels in France, UK, Porto Rico, USA, Canada, Taiwan R.O.C., Japan, México, Portugal and Maroc, and so TVE and Aragón Televisión, have emitted our dances.

In our school, we work with the youths and adults of our city and zone. These boys will be the new components of the group, selecting the best ones. At this moment, we have more than 100 pupils.

Aragonese Folklore Festival “Virgen de la Cueva”: We organize, each year since 1979, a Folklore Festival with our pupils.
Traditional Aragonese Games: In the Resurrection Sunday, there was a tradition: The Billas Game, and it was played in many streets of Jaca. Each year, we organize a competition, in order to show this forgotten game.
Divulgation Activities: Speeches, Slides, Media articles, etc…
For any doubt or question, just contact us by Fax or E-Mail. 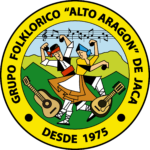